‘My initial response was to sue for defamation of character but then I realised I had no character.’
Charles Barkley, US basketball player

One course, three different pathways and 5 modules – in Media Law, I produced  the largest online and most complicated online training course ever for the BBC.

Each module opened with a one-minute animation. The Defamation module had an extra animation, Identification.

The old course, Legal Online, was created in Flash and consisted of extensive specially created scenarios.

The course was mandatory for BBC News  but had to be available as an easily accessible resource for all content creators across the BBC – from Children’s to Sport. I therefore ensured contributors from all over the BBC ranging from the Home Affairs team to BBC Comedy were featured. Key people outside the BBC including Christopher Jefferies, Max Mosley and the Prince of Defamation himself, Ian Hislop also provide their valuable insights.

Media Law had to be developed and built in an agile manner reflecting the fluid nature of the law at that time. The Defamation Act 2013 was still being debated during production. Scotland was always going to have to have its own version of the course to reflect its separate legal system.

I  worked closely with developers Atticmedia to ensure the course was produced flexibly in HTML so changes created by the Defamation Act could be easily incorporated where necessary when the time came. This approach meant the last minute addition of the Northern Ireland pathway in March 2013  could be produced within a tight, two-month timeframe.

Attic Media provided a comprehensive Course Framework document as part of their final delivery. Media Law consists of a standardised kit of re-useable HTML interactions that align with the BBC GEL guidelines and can combined in various combinations to create future online courses.

I worked with Senior User Experience Designer Carl Hattley to ensure the design was very stripped back and minimal. This ensured the legal principles were clear and easily absorbed.

Each module was colour coded for ease of navigation – Defamation was purple, Contempt was blue, Privacy was red and Copyright was green. 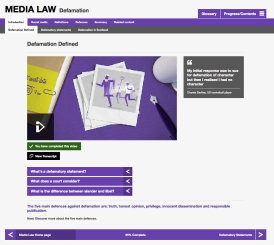 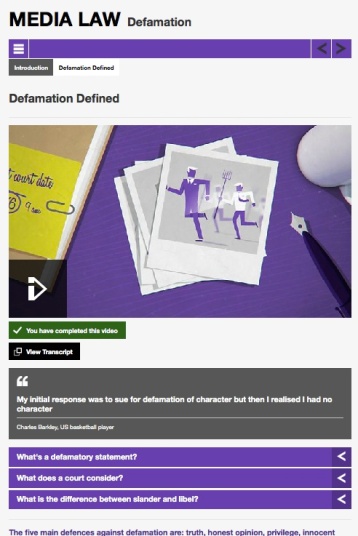 Fair Trading proved a one-minute opening animation was an effective way of both grabbing attention and conveying the key learning points of a module. With Media Law, I wanted the animations to be elegant and stripped back – they would set the visual tone for the rest of the course.

Animator Simon Tibbs and I storyboarded the animations together as well as the visuals for the summaries that appeared at the end of each module.

Different versions for each pathway