A first for the BBC Academy

Fair Trading allowed me to transform a long held creative impulse into practical reality – namely create an entirely animated course in a classy style appropriate to a demanding audience.

I worked with Damn Fine Media to produce a proof of concept animation that demonstrated to our stakeholders that this would be a very worthwhile means of communicating learning on an otherwise uninspiring subject.

I  believed using some animation fairy dust meant I could produce a very different course that still communicated the very important learning objectives. It was really important to stress to the Subject Matter Experts (SMEs) that even though I  was proposing a light hearted look and feel this didn’t mean I was taking the subject lightly.

The stakeholders loved the approach. I then worked with Damn Fine Media to produce 8 animations for all the key subject areas of the course.

I built the course in Mohive, the web based rapid development eLearning tool. I created slides in Photoshop using the assets from the animations and uploaded them to Mohive.

Each section followed the same pretty much the same format – an introduction animation, summary slide, an interaction of some kind (drag and drop, hotspot) and a case study.

And you could also print out your very own Super Duper Fair trading badge.

However, this is a Flash course and so an accessible version was needed too. It was decided while this course was being built that from now on the Academy would only have one HTML version for everybody. So this ended up being the last of the dual courses.

This is the accessible export from Mohive. It looks very different to the Flash version.

Not only is it not as attractive as the Flash version …but the HTML code behind it is all confused as well.

There is a lot of extra gunk that gets exported with it that’s no good for a screenreader. At first, I tried to tidy up the code in the background as best I could…taking out all the div classes etc. But it was taking a long time – and it still wasn’t going to look any better on the front end. So then I talked to our developer to see what he thought.

So this is what we came up with in the end. It has much more of the same look and feel about it as the Flash version of the course. 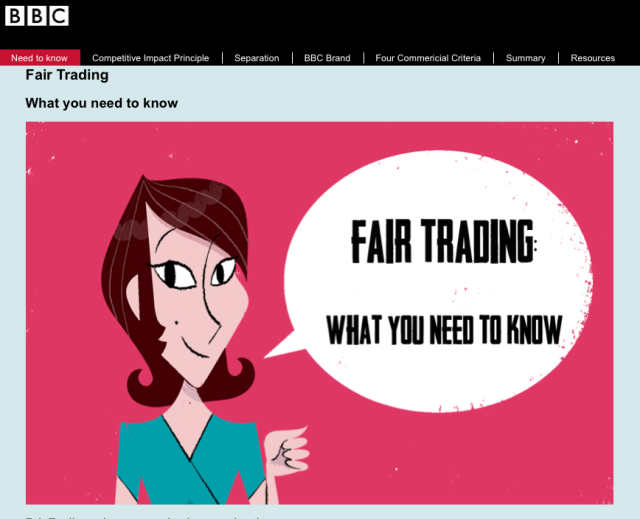 However, the drag and drops and hotspots are not  interactive in this version – instead you see the answers underneath. So this clearly wasn’t a perfect solution but it was definitely moving in the right direction and a vast improvement on the text only versions of the past.

Each section is on a separate page. It’s not locked down unlike the Flash version – you can complete the sections in whatever order you like. Furthermore you can go back to this later as a reference  because the content isn’t locked away.

Fair Trading paved the way for the Academy’s move from the traditional locked down e-learning approach towards a more website based look and feel. Animation had been proven to be an effective method of learning – after Fair Trading, other Academy courses were to use a similar approach.