Choose your own BBC Career – Twine

Project Brief: To use free platform www.twinery.org to build an interactive story which uses existing BBC Academy content and acts as a career pathway, guiding potential entrants to the correct BBC trainee or apprenticeship scheme based on the choices they make.

This is another development project I worked on with Chromatrope (along with iTunes U and the Massive Open Online Course with Future Learn) that placed the Academy at the forefront of digital innovation ahead of its move to Birmingham.

Every year, many applicants apply to the incorrect Academy traineeship or apprenticeship scheme. Potential applicants said they found the breadth of schemes available bewildering. Don Kong (who was the Manager of the BBC Production Talent Pool) had asked for an interactive career pathway but was told at the time that it would be too costly to accomplish. With Twine, we had a chance to get a prototype online quickly that could be tested.

This project was achieved quickly and with minimal cost – from the initial research through to the launch was around 4 months.

I devised a 2 day workshop with Don Kong, Chromatrope and designer Jasia Warren.  We kept these four words in mind as we developed the prototype career map:

PLAY – It’s a game. You are dropped into a story universe which needs to be explored. What will you find?

LEARN –  As you proceed through the narrative you discover useful real life information relating to each story stage.

DISCOVER – What kind of career is best for you?

I then wrote pathways which linked together Journalism, Production, Radio and Online BBC Academy content. 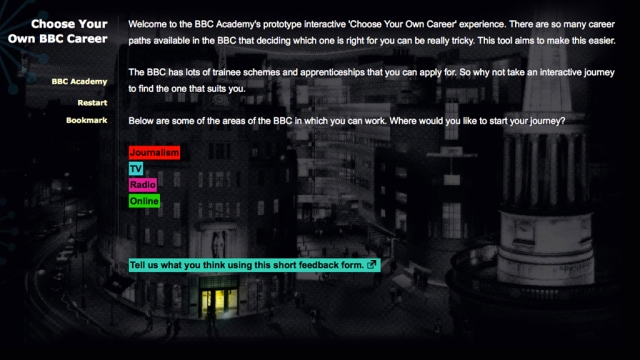 The initial feedback is promising. Feedback comments include:

“This is a great way to help people who are interested in media careers but aren’t quite sure how to take the next step and narrow down their options – really found this useful!”

There are many other ways Twine could be used to create content and learning journeys and the idea will hopefully be developed further.