Twin Peaks – one of the most famous fictional towns in America – came to BBC Radio 4 on Easter Monday 2015.

I spoke to documentary producer Dave James and artist Kim Thompson  who created the eye-catching illustrations to decide what would work best online.

Firstly, to begin drumming up interest,  I created a promo that went on Digital Spy. This was picked up by the NME.

Den of Geek and Twin Peaks Fans picked up the story and linked back to the Radio 4 Twin Peaks site.

For those new to Twin Peaks, I produced a Who’s Who in Twin Peaks that would sit alongside Kim’s wonderful Twin Peaks Family Tree. This traced the influence of Twin Peaks – from the X-files to Sesame Street.

Rob da Bank and Richard Ayoade were among the well-known names that appeared in the documentary.

Richard Ayoade explained why he thought David Lynch was a genius.   This was an exclusive clip for the Radio 4 in 4 site that didn’t appear in the documentary.

Documentary presenter Danny Leigh wrote about the enduring popularity of the series and considered what would be different about a twenty-first century Twin Peaks.

Finally, there was a chance for the audience to meet the contributors and the artist.

These pieces of content were shared with key sites (externally, sites such as Digital Spy) and internally (e.g BBC Music)  and scheduled to go out in the three weeks leading up to the main broadcast with the most popular tweets and Facebook posts recycled after the broadcast.

It was repeated just over a month later which made Agent Cooper very happy indeed. 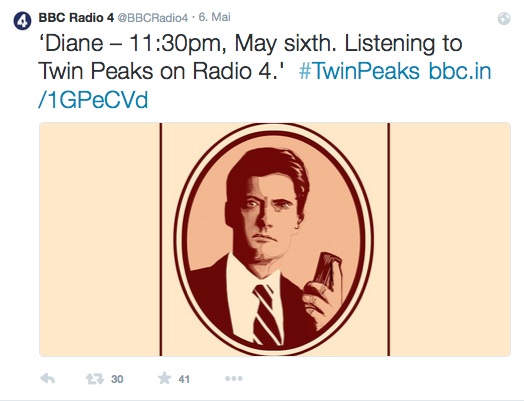